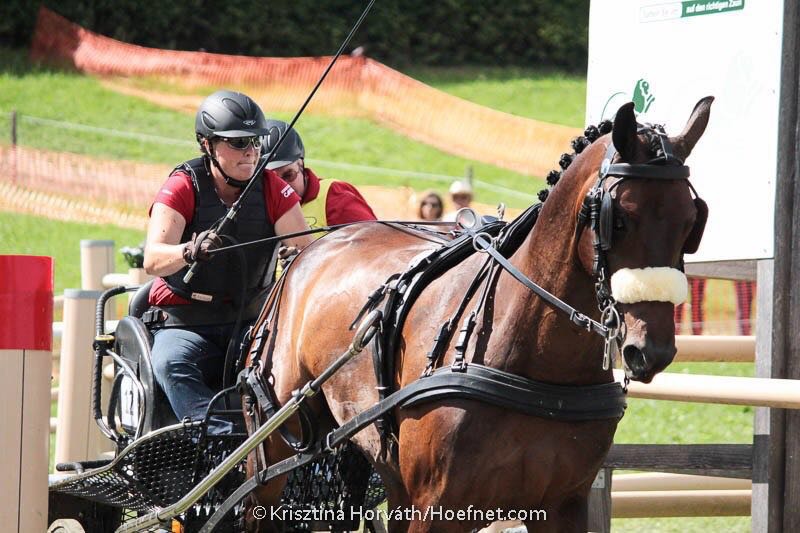 Canadian Kelly Houtappels-Bruder who resides in the Netherlands successfully took part in the ninth edition of the FEI World Single Horse Driving Championships in Piber, Austria this past weekend. Kelly managed to qualify for the event earlier in the season with a new horse and her goal was to finish in the top 20. After an exciting competition the sympathetic driver finished above expectations in a well-earned seventh place in a field of 75 competitors!

The World Championships began for Kelly on a sunny Thursday morning where she was the first to drive her dressage test directly after a break. Houtappels-Bruder didn’t know exactly what to expect as this was the first time her 8 year-old Oldenburg Flip would drive in such an imposing arena filled with spectators. The drivers who had started earlier that morning had not received the points that they had deserved which added to the stress of the competition. The judges were extremely critical, but Kelly and Flip managed to keep things under control and drove a good dressage test, leaving the ring with 57,18 points. With an 18th place she managed to finish just in front of her good friend Saskia Siebers of the Netherlands.

On marathon day the drivers started in reverse order of the dressage results so Kelly began with the last group of drivers. The course, designed by the Hungarian World Championship course designer Gábor Fintha had a good flow, increasing steadily in difficulty and precision. The first obstacle in the sand ring of the main arena provoked drivers to drive aggressively and as a result was quite spectacular for the huge turnout of spectators. The following obstacles became more and more technical with the last few testing the ultimate endurance of horse and driver.

Kelly drove together with her groom Ad van Gestel a strong marathon and finished in an impressive 9th place and moved up in the combined results to 11th place.

The driver’s nerves were put to the test as Fintha set out a challenging and technical cones course on the closing day of the World Championships. The difference in points between the top drivers was incredibly small and many a man lost his chance at a medal. Kelly drove Flip clear through the course and recorded only a small amount of time faults. Thanks to her tenth place finish in this section she closed the World Championships in Piber with a deserved seventh place. Saskia Siebers finished her first World Championships with the individual bronze medal, the gold went to the German driver Dieter Lauterbach and the silver went to Weronika Kwiatek of Poland.

Kelly thanks her sponsors Dominick, WeProvide.com, Mirjam Horse Products, Horsefood the best and Hubens Hay Service for their wonderful support.