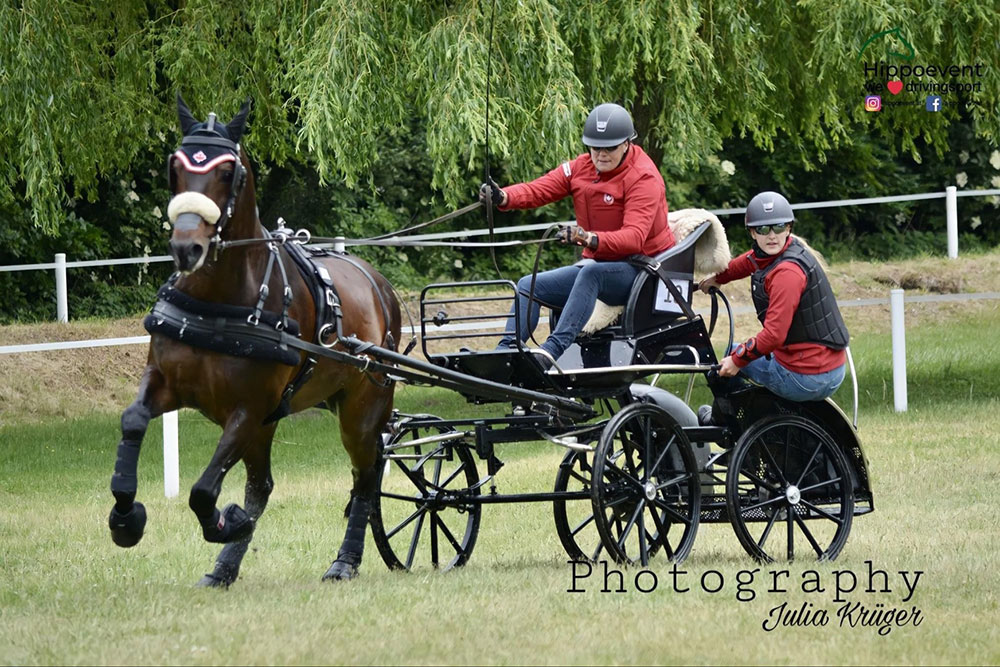 Canadian Kelly Houtappels-Bruder of Ariss, ON, now a resident of Steensel, NED, drove her way to third overall in the CAI 3* Horse Single Division at the Fédération Equestre Internationale (FEI) Driving Competition – Greven-Bockholt 2022 event held from May 26-29, 2022 in the northern region of Germany.

Hosted by the well-known driving association St. Martin Greven-Bockholt, the exciting competition was held at the beautiful facilities of the Sahle family. Houtappels-Bruder and her partner Flip (Fidertanz x Carprilli), a 13-year-old Oldenburg gelding, whom she co-owns with husband Frank Houtappels, finished third overall, out of 36 competitors representing six nations, in a broad program created by Michael Swiezynski and his team.

Houtappels-Bruder and Flip opened the competition finishing in second place, with a score of 73.29% and 42.85 penalty points in the dressage phase. After their strong start, the pair dropped to 11th place in the Marathon stage, completing the round with a 107.72. After two events, the Canadians sat in first place with a combined 150.57. The athlete-horse combination concluded the event with cones, finishing with 12.92 penalties and an overall combined score of 163.49 behind the Netherlands Rudolf Pestman and Diesel (158.04) and Germany’s Dieter Lauterbach and Dirigent 47 (158.62).

“We were happy with the competition; Flip was in super form and the dressage is finally starting to become consistent” said Houtappels-Bruder. “The marathon and cones were extremely challenging, despite a solid marathon, the cones tripped us up and dropped us two places, lots of homework for the next competition.”

The Canadian pair is aiming for the World Championships in Le Pin-au-Haras, France in September.