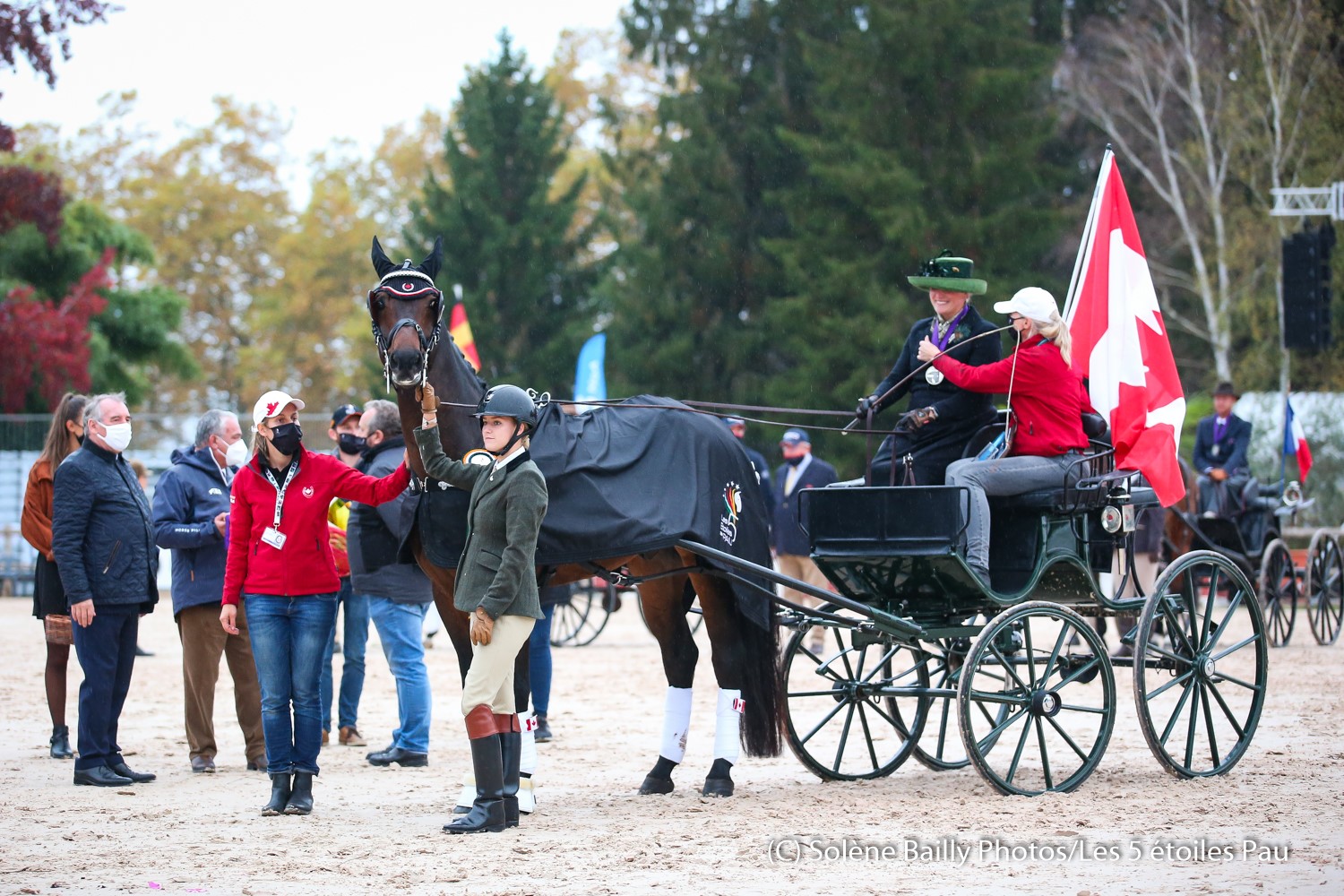 Canadian Kelly Houtappels-Bruder’s journey to the podium was like any other for a high performance athlete: a meticulously-planned progression supported by countless hours of training, hard work and sacrifice. But her silver medal performance at the 2020 FEI World Driving Championship for Singles, held Oct. 21-26, proved that perhaps the most important tool in an athlete’s arsenal is the ability to enjoy the ride.

Kelly’s medal journey started with the 1,200km trip from her home in Steensel, NED, to the venue in Pau, FRA. Even with an overnight stop, the travel didn’t phase her trusty partner Flip (Fidertanz x Carprilli), whom Kelly co-owns with husband, Frank Houtappels.

“Flip travels really well and came off the truck the first night fresh and happy,” said Kelly of the 12-year-old Oldenburg gelding. “We arrived in Pau and he immediately settled in and began eating. The venue in Pau was super and you immediately felt the energy of a real World Championship.”

Adding to the buzzing atmosphere was Les Étoiles de Pau, France’s only CCI 5*L eventing competition, which ran alongside the Championship. Kelly commented, “The combination of the two sports works really well together and it was great to see athletes from both disciplines watching and supporting each other. Right behind the show grounds is a huge training track. You wake up in the morning to the sound of the Thoroughbreds out on the gallops and all of this with the Pyrenees mountains in the background.”

Unfortunately, even a picturesque background and the hustle and bustle of not one, but two major equestrian competitions weren’t not enough keep thoughts of the coronavirus (COVID-19) pandemic at bay.

“COVID-19 definitely had an impact on the competition – it seemed strange to be there without our friends from the USA and Austria, and I really missed the social events that make a world championship so special,” reflected Kelly, who is close to many of the singles drivers and often trains alongside her Dutch counterparts. “The organization did a wonderful job of ensuring a safe atmosphere for the competitions. Masks and social distancing were mandatory, washrooms were kept in pristine condition and the number of spectators allowed to the event was decreased dramatically, though as a competitor we were completely separated from the public. The organization also arranged COVID tests for us before we left, which was great.”

Reassured by the safety measures in place, Kelly and Flip readied to embark on the third Championship of their career as a combination. In the forefront of Kelly’s mind was her goal for this go-around: to relax and relish the moment.

Speaking of her previous Championship experiences, Kelly explained, “My first World Championship [with Flip in 2015 in Piber Köflach, AUT] was overwhelming and a surprise – no one expected us to finish seventh, not even us! In 2018 in Kronenberg, we had been consistently placing in the top three internationally and had the expectation of carrying that on through the Championship. I put so much pressure on myself to do well that I ended up having an absolutely miserable week and couldn’t enjoy the sport at all. This was a huge wake-up moment for me.”

Determined to not repeat past mistakes, Kelly hit the dressage ring focused on enjoying the experience with Flip and Meike Paridaans, her groom and navigator. Her positivity paid off with a stellar test that placed third with 45.89 points, setting the combination up for prime podium position.

“Flip was an absolute disaster in dressage when I got him: four legs going in four different directions,” laughed Kelly. “The fact that we drove the third best test at a World Championship is a testament to five years of training and the amazing character of this horse. Even with confirmation that is essentially the opposite of what you want a driving horse to have, Flip has managed to transform into an international level animal. It all has to do with character; Flip is a worker and he never says no.”

After performing better than expected in the dressage phase, Kelly was sitting pretty on the knowledge that the marathon is where Flip shines brightest, as the phase highlights his natural speed, handiness and stamina. Kelly commented, “I’m rarely really nervous before a marathon because I know what to expect. It’s up to me to know my course inside and out and not make any errors.”

The marathon at the Championship featured eight large obstacles spread across almost 12km and two sections encompassing a forest and the arena complex. Kelly and Flip handled the challenge masterfully, adding 88.43 points to their total to bump up to second in the standings.

“Considering the irregular season we have had leading up to the Championships, this was the first full marathon most horses have driven, as most of the shows only offered six or seven obstacles with a warm-up instead of Section A [through the forest],” explained Kelly. “This was definitely an advantage for Flip, as he tends to excel the heavier a marathon is.”

After executing a precise cones phase limited to 4.68 points, Kelly and Flip sealed their silver medal deal on a final score of 139.00 points. An elated Canadian contingent made their way back to the ring for the prize giving ceremony. Unfortunately, a combination of rain, cold, a bit of a delay in the proceedings and a very fit Flip who remained fresh despite the tough competition led Kelly to barely be able to soak in her surroundings.

Kelly laughed, “I was so concentrated on not letting my horse explode that I didn’t even really take notice of the medal!”

All too soon, it was time to pack up and make the return journey home. There, Flip had a few days off before picking up some hacking and light dressage work to support his recovery from the action-packed week prior. The upcoming winter season will see Kelly, who now sits second in the FEI Driving World Ranking – Singles, prepare to aim for the gold with Flip at the 2021 Championship in Haras du Pin, FRA.

Looking back at her previous Championship experiences that all helped lead to this silver medal moment, Kelly reflected, “I am not naturally a good competitor. I enjoy training and driving at home much more than driving and riding at competitions. Going into 2020, our focus was to just drive well and, most importantly, have fun because there is nothing in the world better than getting to work with these amazing creatures every day. I think our new mindset paid off!”

Re-live Kelly and Flip’s performance at the 2020 FEI World Driving Championship for Singles via the links below: